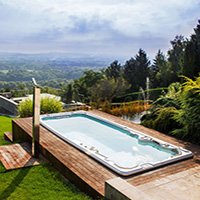 Because we deal exclusively in Hydropool swim spas, you probably know what our answer would be to the question of “What is the best swim spa to buy?” That said, we wouldn’t sell Hydropool swim spas if we didn’t believe they were the best on the market. Hydropool has been in business for over 40 years and has placed a great deal of emphasis on research and development. What has resulted are the best swim spas in the world. If you need further convincing, we’ve put together a list of some of the top technologies that Hydropool has come up with to power their world-famous swim spas.

Swim spas are meant for swimming, not for cleaning. Hydropool has ensured this is the case by creating the world’s only self-cleaning swim spa. The attention paid to the workings of the swim spa’s filtration system has allowed this to happen. Hydropool swim spas can filter their entire contents in under 40 minutes. This means the water gets filtered at least 36 times every 24 hours. Hydropool has also re-designed the swim spa shell and the placement of the water jets to efficiently move water towards the skimmer where it’s pre-filtered before it passes through the sensitive water pumps and heater. Debris that falls to the swim spa’s floor is sucked up by its powerful Hydroclean Floor Vacuum. This means the swim spa is doing the vacuuming for you. The result is more swimming time. Hydropool swim spas also feature inline chemical dispensers which eliminate the need for unsightly and inconvenient floating baskets. For those who want to reduce their reliance on chlorine ozone and UV systems are also available.

Hydropool’s patented V-Twin Jets are some of the most powerful swim spa jets available. They each pump more than 600 gallons of water per minute which tops the industry. Hydropool has discovered that the reason early swim spa models were so difficult to use was because of the vortex created when the swimming current was generated. They invented the V-Twin Jet system to minimize the vortex and provide a smoother, more natural swimming experience. Hydropool swim spas are also known to create one of the widest swimming currents available. This makes them ideal for larger swimmers. Hydropool has emphasized producing a swimming current that creates a natural swimming experience. The V-Twin Jets are the result.

Another factor that can affect the satisfaction of the swim spa swimming experience is the turbulence created in such a relatively small tank. Hydropool has rectified this by placing patented Current Collectors at the end of the tank to reduce the ability of waves to bounce back towards the swimmer. Combined with a streamlined shell to reduce side-to-side turbulence, Hydropool has created one of the smoothest swimming experiences in the swim spa world.

The Hydropool Executive Trainer Collection of swim spas all feature two 5hp pumps and one 4hp buoyancy pump to keep the swimmer centered in the swimming current. The swimmer can control the swimming current speed from zero to 6.84 mph. For reference, Olympic world record holder, Michael Phelps, swam the 200 meter freestyle at about 4.7 mph. Hydropool swim spas come with pre-programmed workout routines while also allowing the swimmer to program their own. The control panel allows swimmers of all types to comfortably use Hydropool swim spas.