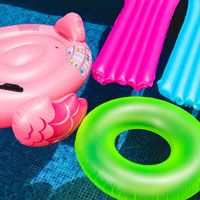 What kind of backyard swimming pool is complete without a range of inflatable pool toys?  From the functional, such as life preservers, water wings and kickboards to the ostentatious such as floating unicorns, swans and flamingos, inflatable pool toys are strongly associated with fun, sun and relaxation around the pool.  But what are inflatable pool toys made of?  Some scientists have analyzed what makes up these common backyard pool accessories and what they found wasn’t so benign.  Many inflatable pool toys are made of polyvinyl chloride, also known as PVC.  To learn more about this material and others, we’ve put together this informative article.

PVC is a popular type of synthetic plastic.  In fact, it’s the third most common plastic produced in the world.  While in its pure form it’s solid and brittle, but the addition of a plasticizer known as phthalates allows it to become soft and flexible.  Hence being ideal for making inflatable pool toys.  But this is where problems have been found to arise.

What’s the Problem with Phthalates?

Low molecular weight phthalates are being legislated out of existence because of their apparent health effects.  Phthalates have been found to be endocrine disruptors which interfere with the ability of hormones in the body to do their jobs properly.  Research has indicated they can be associated with reduced fertility, insulin resistance, breast cancer and immune system or metabolic disorders.  It’s also been suggested that phthalates can be particularly harmful to children.

How Are We Exposed to Phthalates?

You can probably notice a strong smell emanating from many types of inflatable pool toys.  This is the result of off gassing or the release of phthate fumes from the PVC.  Inhalation of these fumes is one way of being exposed to phthalates.  Chewing on PVC toys or eating food from plastic containers can also lead to phthalate ingestion.  Heat and sunlight also increase the ability of phthalates to be released from PVC.  Not so great when you’re talking about a swimming pool.

What Inflatable Pool Toys Should Be Avoided?

If you’re concerned about phthalate exposure you should check what your pool toys are made of.  One way to do this is to look at the recycling triangle on the toy – if there is one.  The number 3 in the triangle denotes the presence of PVC.  If possible, you should try and avoid these.  Funnily enough, the longer these types of materials have been around, the less phthalates that are released.  For this reason, older, or secondhand, inflatable pool toys will likely be less toxic than brand new ones.

Are There Any Alternatives?

When it comes to floatables in the swimming pool that don’t contain PVC and phthalates, you should look to things made of ethylene vinyl acetate also known as EVA.  Pool noodles are typically made of EVA.  You can also find mats and float belts made of this material Polystyrene, also known as styrofoam, is also a less harmful material that also floats.  However, because these materials aren’t inflatable, you may need more room for storage, but you can at least rest more easily when it comes to your family’s health.

To find out more about our above ground pool models, download a free brochure.