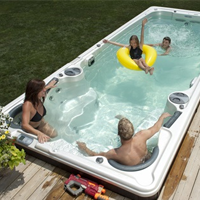 The new year is commonly used as a time to come up with resolutions for a better year to come! Being that we’re in the swim spa business, we thought this would be a perfect time to create resolutions that will ensure a better coming year for our swim spas. To find out our new year’s swim spa resolutions, check out this list.

Get More Use Out of The Swim Spa

Although most use their swim spa several times each week, we know it can be used even more often than that. For the New Year, get out into the water more often, raise your heart rate while working on your swimming technique. Invite people over more often to share in the use of your swim spa. We know that you don’t necessarily have to be constantly swimming in a swim spa. Sometimes it’s nice to just sit back, relax and share a drink with family and friends. There’s a reason why those lounging seats are there, and many resolve to use them more often than none.

Like most swim spa owners, we prefer swimming and relaxing in the swim spa much more than cleaning and maintaining it. However, we understand that maintenance is absolutely necessary if we want a clean and safe swimming environment. For that reason, we resolve to stick to our cleaning and maintenance schedule. We’ve already broken down the various tasks into weekly, monthly and quarterly lists. Now we just need to stick to the routine!

Often, it’s just so tempting to jump into the swim spa after we get home from work and that’s what we usually do! However, we also know that failing to shower before getting into the water just increases the amount of cleaning and water chemistry balancing that we have to do. For that reason, we’re making a resolution to shower every single time before we get into the swim spa. Although temporarily inconvenient, we understand that we will greatly benefit in the long run.

We inherently understand that the swim spa cover is a multifunctional piece of equipment. It’s often considered an accessory, but we know that it’s actually an essential piece of gear. Sometimes we’re guilty of failing to replace it every time we’re finished with the swim spa. Yes, of course more leaves and bugs will get into the water.  And yes, there’s a noticeable increase in the amount that the water heater is running. We also know the water chemistry is affected by the increased evaporation, even if we may not be able to visually notice it, but sometimes we just get lazy and fail to replace it.  Well, we’re resolving to change that in the new year. Not only will our energy bills go down, but our water will remain cleaner for longer. Win, win!

Although a swim spa provides plenty of entertainment in and of itself, this year we resolve to try out some new accessories. We’re super fascinated with swim spa rowing machines. Not only do they look like a lot of fun, but they also add some variation into our water based workouts. We’ve also seen some exciting videos on social media where people attach boogie boards to the business end of the swim spa and ride the current like a wave in the ocean. And maybe this is finally the year to get caught up with technology and install a bluetooth speaker system. This will not only allow us to listen to the music we have on our phone, but it’ll put an end to having to drag our boombox out of the garage every time we want to listen to music.

Happy new year everyone!  Here’s to a great new year with our swim spas! Download a free buyer’s guide to learn more.