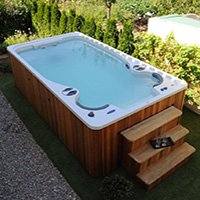 Swim spas are a perfect alternative to a full-sized swimming pool or a lap pool if there’s not enough space to install the larger tanks. Relatively speaking, swim spas are compact and can fit into areas that wouldn’t be able to hold their larger counterparts. But just because you have a swim spa doesn’t mean you’re able to get away from maintenance duties. It’s still important to maintain properly balanced water chemistry, keep the filter cartridges free from debris and change the water regularly. This may have you wondering how to drain a swim spa. In this article, we go over the need for changing the water in a swim spa and how to go about doing it.

Why Should You Drain a Swim Spa?

Swim spas need to be drained regularly because you’re essentially using a relatively small amount of water over and over again. Swim spas are closed systems which means that new water isn’t regularly being introduced. The water that’s in the swim spa is simply being recirculated through the system. Draining the swim spa allows you to thoroughly clean the shell, but more importantly, it allows you to begin again with a fresh tank of water. Think of the swim spa as akin to a fish tank. The longer you leave the water, the more algae grow, the smellier the water gets and the cloudier it appears. Draining the fish tank allows you to clean everything and give your fish new water to swim in.

Another reason why you might need to drain your swim spa is if you aren’t planning to use it for several weeks. If you aren’t using your swim spa, it’s more efficient to empty it and shut it down than it is to allow it to sit unused. Not only will you be wasting electricity, but the water quality will naturally start to degrade and you’ll end up having to perform a cleaning job before you’re able to swim again. Draining the swim spa completely will be better for it and you in the long run.

How Often Do You Need to Drain a Swim Spa?

The water in a swim spa should be changed at least twice a year. If it’s getting high levels of usage, it might require more frequent changes. If the chemical levels become imbalanced you might need to start again with a fresh tank of water. You can reduce the need for draining the swim spa by keeping the water clean, but you’ll never be able to eliminate the need to change the water. Making sure swimmers shower before using the swim spa, replacing the cover whenever it isn’t being used and following a regular maintenance schedule will all keep the water cleaner and reduce the frequency with which you need to drain the swim spa.

How To Drain a Swim Spa?

It’s important to remember that a swim spa contains several thousand gallons of water. Managing the release of the water will be a necessity. Failure to do so could end up with you flooding your house, your neighbors’ property or your backyard. If you can drain the swim spa straight into the sewer system you can avoid any problems associated with flooding. If this isn’t possible, make sure to channel the water to an area that’s able to deal with that amount of water.

Most swim spas will have a drainage spigot that allows you to attach a hose and let the water run out to an appropriate place. If your swim spa doesn’t have a spigot, you’ll need to use a pump to get it out. Either way, make sure to turn off the power to the swim spa as running it without water could damage the mechanical components.

Now you have a better idea of how to drain a swim spa, download a free buyer’s guide for more information.