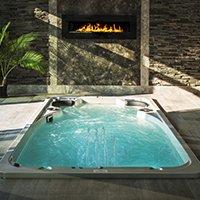 We’d all prefer to swim in clean, fresh and clear water. Swim spa water that smells or appears cloudy doesn’t exactly beckon an undecided swimmer and if left too long, it could even be dangerous. You should learn how to clean up cloudy water in a swim spa if you want to keep your family safe. You should also know how to keep the water clean in the first place.

As the old saying goes, “An ounce of prevention is worth a pound of cure.” Preventing your swim spa water from getting cloudy in the first place will significantly reduce the amount of labor required to clean it up and lower your reliance on chemical additives. Here are a couple of tips that you can employ to avoid cloudy swim spa water.

An exposed swim spa is at the mercy of the surrounding air currents. Wind will often blow leaves, pollen, dirt, dust and other pollutants into the water. That’s not to mention other things that simply fall into the water such as rain, insects or bird droppings. While you’ll need to remove the cover whenever you’re swimming, you should replace it whenever the swim spa isn’t being used. This will reduce the number of airborne pollutants that get into the water and lessen the chances of it becoming cloudy.

Aside from airborne pollutants, the swimmers themselves are one of the largest contributors to cloudy and odiferous swim spa water. Sweat, body oils, soap residues, cosmetics and personal care products will all affect the balance of the water chemistry and promote the production of organic compounds. By simply rinsing off your body before getting into the swim spa, you remove a lot of the impurities that can lead to cloudy water.

A hot tub is shocked regularly to oxidize odor-causing amines and break down organic waste contaminants that can cause the water to go cloudy. The pollutants are broken down and previously bound sanitizers are reactivated. The swim spa should be shocked at least once a week or more often if it’s getting a lot of use.

Hot tub sanitizers are chlorine or bromine-based chemicals that are added to the swim spa on a weekly basis to disinfect the water by killing bacteria. It’s also effective at neutralizing algae, mold and mildew. If your weekly addition of sanitizer isn’t keeping the water clear, you may need to apply it more frequently or in greater quantities.

Keeping the pH level balanced not only ensures that the swim spa water doesn’t irritate the skin, but it can also help prevent the water from becoming cloudy. Swim spa water that is allowed to become too basic (ie: a high pH level) can cause calcium to solidify in the water and make it appear cloudy. Checking the pH level should be one of the first things you do when trying to figure out why the water isn’t looking right.

Total hardness is another level that should be checked if the swim spa water has become cloudy. Total hardness measures the amount of calcium and magnesium that’s dissolved in the water. When this level gets too high the water becomes saturated and these elements begin to solidify and cause cloudy water and scaling. If this happens you’ll need to dilute the swim spa water by partially or fully draining it and refilling it with fresh water.

Now you know how to clean up cloudy water in a swim spa. If you want more information, download a free buyer’s guide today.