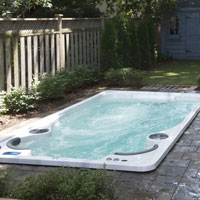 Unfortunately, there’s more to owning a swim spa than simply practicing your swimming strokes and relaxing in a refreshing pool of water. For the swim spa to be refreshing, a comprehensive maintenance schedule needs to be put in place. Testing the water chemistry, adding chemicals to the water, cleaning the filter cartridges and maintaining the various components are all part and parcel of running a clean and healthy swim spa.  What about shocking the water? Where does this fit into the maintenance schedule?  You may ask, “How often should I shock my swim spa?” To help answer these questions and more we’ve put together an article detailing the swim spa shocking procedure.

How Often Do You Need to Shock Your Swim Spa?

You should shock your swim spa at least once a week. If you’re using your swim spa more often than usual or if you’ve had a lot of guests using it, you may want to up it to two or three times a week. Conversely, if you’re going through a period where you’re not using your swim spa so much, you could get away with shocking it every couple of weeks. It really depends on how much use your swim spa is getting. The more it gets used, the more you should apply a shock.

How Does Swim Spa Shock Work?

The reason you shock your swim spa water is to break down the buildup of organic compounds. As the concentration of organic contaminants increases, the water will get cloudier, it may start to smell bad and it could allow the growth of algae, foam and other unpleasant substances. Organic compounds are most often introduced into the water by the swimmers themselves. It could be dead skin cells and natural oils or residues from soaps, shampoos, makeup, deodorants and sunscreen. It could also come from insects and leaves falling into the water. There’s no completely effective way to prevent organic compounds from getting into the water which makes shocking necessary.

Over time the chlorine or bromine sanitizers that you add to your water to kill bacteria and viruses begin to break down into chloramines and bromamines. These are the substances that are responsible for the chlorine-like smell that swimming pools are so well known for. Shocking the water reactivates the sanitizers by converting the chloramines and bromaines back into chlorine and bromine.

What Are Swim Spa Shocks Composed Of?

There are a few main types of swim spa shock that are readily available. Some work better at the lower temperatures found in swimming pools whereas others work better in hot tubs. Swim spas are often a combination of both, so it’s important to match your chosen shock with the water temperatures you keep.

Dichlor won’t break down in high temperatures or sunlight because it uses cyanuric acid as a stabilizer. This makes it appropriate for use in hot tubs. It also works well with saltwater systems because of its stability; you don’t have to worry about the presence of sunlight when you use it.

Calcium hypochlorite, also known as cal hypo, is less stable than dichlor and can therefore be easily broken down by exposure to sunlight or high temperatures. This makes it more appropriate for swimming pools and should be added in the evening after the sun goes down. Because of the concentration of calcium, it can cause problems in smaller tanks and saltwater systems.

Non-chlorine shocks are generally composed of potassium monopersulfate or MPS. It’s odorless and it’s popular among people with sensitive noses. It allows you to oxidize organic compounds without the worry of temporarily raising your sanitizer levels or bleaching that may occur with chlorine based shocks.

Now that you have a better understanding of swim spa shocks, download a free buyer’s guide today.