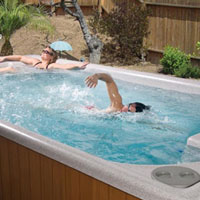 There has been a large growth in interest in swim spas these days. Regulations imposed due to the Coronavirus pandemic have reduced accessibility to gyms and public swimming pools. This has led to more inquiries into home based exercise options. For those who have never used a swim spa before, there are often questions about how they work and the type of swimming they allow. For example, how fast can you swim in a swim spa? To help educate swimmers who have never experienced a swim spa, we’ve put together this report.

How Does A Swim Spa Work?

Swim spas are often referred to as endless or perpetual swimming pools because they allow the swimmer to perform their stroke without ever reaching the end of the pool. This is accomplished by the generation of a powerful water current using water jets, propellers or paddlewheels. This keeps the swimmer in one spot while they swim against the flow of the water. The current is adjustable to allow for different swimming strokes and different levels of swimming ability.

Does A Swim Spa Feel Natural?

There is a bit of a learning curve when using a swim spa for the first time because of the size of the tank, some turbulence is created by the swimmer and the motion of the water. However, many of the major problems associated with water turbulence have been greatly reduced by changing the size and shape of the tank. Many describe the sensation of swimming in a swim spa as similar to swimming in the ocean or on a windy lake.

Swim spas have been around for several decades now, so there have been modifications and improvements in design that can make for a better swim spa. Insisting on some of the following modifications may result in greater satisfaction with your swim spa.

It’s important to know that the number of gallons per minute (gpm) that your swim spa is able to pump says more about the strength of the swimming current than the number of horsepower (hp) used to power the pumps.  While comparing two models’ side by side, the model with the higher gpm rating will create a more powerful current and allow you to swim faster than one with a higher hp rating. Make sure you’re looking at the right numbers when determining relative speed.

Early swim spa tanks were simple rectangles. However, it was soon found that the straight lines in these types of tanks also created a lot of turbulence and made it difficult to swim naturally. It’s since been found that tanks can be aerodynamically designed to reduce the amount of turbulence that occurs by preventing the current from bouncing off the back wall and back into itself. In more modern swim spas, you’ll often find lounge seating at the end of the swim spa to cushion some of this current bounceback and channel it back along the sides rather than directly into the oncoming current.

How Fast Can You Swim in A Swim Spa?

Hydropool is one of the top brand names in the swim spa business. They’ve been making hot tubs and spas for 50 years. Hydropool swim spas use electronic valves to control the rate of the swimming current. This allows for a wider range of swimming speeds. You can set the current in a Hydropool swim spa to run anywhere from just under two miles per hour to over 6.5 miles per hour.

To learn more about the different models of swim spa that are available, download a free buyer’s guide today.