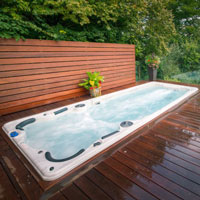 Swim spas were the answer for swimming fanatics who were more accustomed to urban living and smaller plots of property. Even though lap pools were originally the solution for those without the space for a full sized swimming pool, they still often required a piece of land of at least 40 feet in length. With most swim spa tanks measuring less than 10 by 20 feet, they allow personal and private swimming in even the smallest of backyards. How does a swim spa compare to lap swimming? To help you understand we’ve put together this article.

Full sized swimming pools and even lap pools, for that matter, take up a lot of space.  Land becoming more expensive, plots becoming smaller and thoughts about environmental footprint becoming more prevalent, swim spas have become much more popular among those that love swimming at home. Not only is less space used, but fewer resources are required to operate a swim spa. If you’re looking to minimize the footprint created by a swimming pool, swim spas have made it virtually as small as possible.

If you want to know how a swim spa compares to lap swimming, many experienced swim spa owners compare it to wild swimming in the ocean or a lake. The current that keeps the swimmer in place in a swim spa, as well as the size of the tank, creates some turbulence that you normally wouldn’t encounter in a swimming pool. The swimmer needs to stay in the center of the current to be kept in place and this may require a bit of practice to become accustomed to. That being said, the swim spa provides a stimulating experience for swimmers at all levels of expertise.

Swim spas are small enough to keep the water heated in even the coldest of weather.  This allows swimming throughout the year even if you live in a region that deals with harsh winters. In comparison, the larger sized pools hold too much water to efficiently heat them and prevent them from freezing up when the temperatures drop. If you don’t want your swimming sessions to be limited by cold weather, swim spas are pretty much your only option.

Even though you would ostensibly buy a swim spa for its swimming capabilities, they’re also quite versatile when it comes to other forms of aquatic recreation. Many swim spas feature lounging zones with hydrotherapeutic jets to simulate the hot tub experience. Dual tank swim spas provide you with both a lounging area and a swimming zone each with their own separate temperature controls. Even swim spas that don’t have a discrete hot tub tank are usually able to be heated to match hot tub temperatures. Many owners find their swim spa gets used for socializing and recreation as much or more than they do for swimming workouts.

Comparing the overall costs of full sized swimming pools, lap pools and swim spas including retail price, installation and operating and maintenance costs; swim spas tend to be far more economical. The upfront price of a swim spa is generally far cheaper than that of a swimming or lap pool. As the swim spa is typically a self-contained unit, installation is quicker and far less disruptive than that of its larger counterparts. The compact size and the smaller volume of water you’re dealing with also reduces the cost of heating and maintaining the water. If price is a concern when comparing your swimming options, the swim spa is usually the more affordable choice.