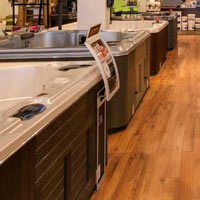 For those unfamiliar with the inner workings of a hot tub, a common question asked is, “Can you plug a hot tub into a regular outlet?” The answer is that it depends on the type of hot tub you’re asking about. There are certain models, commonly known as plug and plug hot tubs, that some can be plugged into your standard household electrical outlet while others require a special receptacle. Alternatively, there are also hardwired hot tubs. These need to be wired into the house’s main electrical panel by a certified and licensed electrician. To explain more about the differences between these two types of hot tubs, we’ve put together this article.

120 Volt hot tubs (which can also be rated 110V or 115V) are what is known as the aforementioned plug and play models. They run off a standard 15 AMP electrical outlet, the types of electrical outlets you’ll find located inside and around your house. 240 Volt hot tubs (which may also be rated 220V or 230V), the so-called hardwired models, have a completely different electrical connection. You’ll immediately notice that you can’t plug it into a standard electrical outlet. You’ll need an electrician to install a GFCI (Ground Fault Circuit Interrupter) protected 240-Volt 50-AMP circuit. Some of the larger hot tubs require a 60 AMP circuit or larger. The GFCI is a safety measure to ensure the power is cut if there’s a ground fault, something that’s necessary when dealing with higher voltages. Ultimately the 240V hot tub will be able to draw more power than a 120V model. We’ll investigate the effects of this below.

Powering the Water Heater and Pump

Plug and play hot tubs draw enough electricity to power a hot tub with a water heater and a single pump. That said, there’s not enough power to run the water pump on high while the water heater is also running. When you turn up your water pump, the heater will automatically turn off. It’s pretty easy to see that this could lead to problems maintaining peak water temperature if you’re maxing out your water pump for long periods of time or if it’s very cold outside. That said, if you’re only running the pump at high speed for short periods of time or the surrounding air temperature isn’t going to affect the water temperature, this may not even be a noticeable limitation. Plug and play hot tubs are also limited to a single water pump, whereas hardwired models can power more than one at a time.

To learn more about the different types of hot tubs, download a free buyer’s guide today.