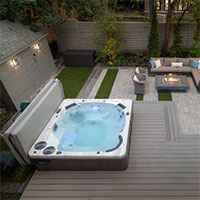 When it comes to salt water hot tubs, there are a lot of myths and misconceptions. You may have heard that salt water hot tubs are maintenance free, devoid of all chemicals or that they’ll cause all your metal components to rust and fall apart. These are actually all myths – which we’ll discuss later on. The fact is that salt water hot tubs offer many advantages which might good cause you to consider switching from your current chlorine-based model.  Can any hot tub use salt water? The answer is that with the proper preparations and follow up you can convert any hot tub to run on salt water. In this article we’ll go over some of the various considerations required for such a conversion.

What Is A Salt Water Hot Tub?

A salt water hot tub is one that uses salt as a water sanitizer. This does not mean that you won’t be using chlorine to keep your water clean, it just means that you’ll be adding salt directly to the water rather than chlorine or bromine. The saltwater based hot tub uses a device known as a chlorine generator to break the salt down into its basic components of sodium and chlorine through the process of electrolysis.

What Type of Salt Is Used?

Salt water hot tubs use a specialized type of salt that’s chemically the same as table salt but is much coarser than the food additive. You can buy bulk bags of hot tub salt or pool salt that is specially formulated to work well with the chlorine generator. The concentration of the salt used in hot tub water, however, is about 10 times less than the concentration of salt found in seawater and even less than the concentration found in human tears. So, the salt would be barely noticeable to the taste – not saying that you should be tasting your hot tub water! Because the concentration of salt is so low, corrosion isn’t as big a problem as some might suggest. By keeping the water properly balanced and wiping down metal parts regularly, it can be easy to keep your hot tub rust free.

How Can Any Hot Tub Use Salt Water?

What Are the Benefits of Salt Water Hot Tubs?

Because chlorine isn’t being added directly to the water, the irritants known as chloramines aren’t produced in a saltwater system. This reduces the chlorine-like smell often associated with hot tubs and swimming pools. If your skin, eyes or nose are sensitive to chloramines a salt water system might be the perfect way to remediate this effect.

Although a salt water system doesn’t mean you’ll never have to check the water chemical levels ever again, you’ll typically need to balance it far less often than with a traditional chlorine-based system. You’ll still need to check the hot tub every so often and you’ll need to clean the chlorinator cell on a regular basis.